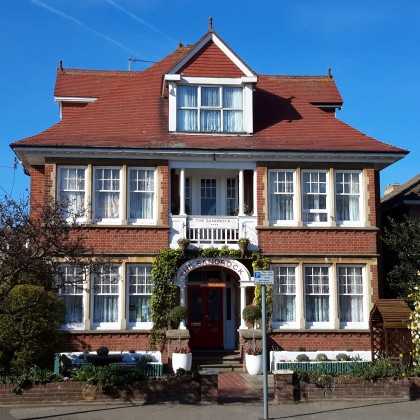 Our plot was allocated in a deed of covenants dated the 29th August 1872, this set out where the roads, drains, gardens etc. were to be. This covenant was in the name of Peter Bruff Esquire.

Within the covenant it states that no trade or business of a Tripe Boiler, Horse Slaughterer, Soap Boiler, Tallow Melter or any other noxious or offensive trade.

It mentions the provision of Tramways along roads, which sadly never happened.

On 4th June 1884 out plot in Penfold Road was conveyed from the Clacton-on-Sea General Land Building and Investment Company Ltd by direction of Thomas Daniel Hayes to James Harman Esq. The plot was 92ft 6″ deep and 150ft wide the indenture which is difficult to understand sells the land for £300.00.

In the indenture it states that a detached house shall be erected at a cost of no less than £450.00. That the house erected on the said premises shall not be used for any other purpose than a said private dwelling house. We have an insurance policy to cover the event of the local authority enforcing the covenant in our deeds. The business rates we pay are probable four times what a private house would be.

Then on 8th July 1889 James Harman sold the plot to Fred Noble, a builder from Stanley Villa. Field Road. Forest Gate. London. The plot is now only 50ft wide but sells for £138.15 shillings. Mr Noble and his heirs and assigns owners are authorised to at all times by day or night at will and pleasure for all proper persons to pass and re-pass with or without horses cattle and other beasts laden or unladen in Penfold Road, Marine Parade West, Jackson Road and West Avenue. Unfortunately this right does not extend to our guests.

We jump 4 years to 20th June 1893 when the owners of Marine View (Now Millennium Court next door) bought the plot and set up the right of way over our side driveway to Ocean View (now Worcester Court). Both being owned by Mrs Mary Ann Noble. A bit puzzling is the date on the front of Worcester Court of 1928.

A house was finally built on the plot, so far we can only date it to about 1912. The house was built by Fred Noble and named the Astoria. Sadly Mr Noble died shortly after and his wife Mary Ann Noble inherited Astoria and promptly gave it to her son Albert Ernest Noble a local Tobacconist in consideration of their natural love and affection. Sadly Albert died in April 1914. His estate was valued at £7,300-17s-3d of which £281-9s-4d was paid to the revenue. Mr Noble the Tobacconist is in an old advert on the walls of the Bar in The West Cliff Theatre. Mary was the sole beneficiary and re-inherited Astoria. Mary lived on to 24th February 1921. Maybe this is when Ocean View is pulled down and Worcester Court is built or converted.

Alfred George Clayden of 132 Leytonstone Road, Stratford a nephew and builder by trade was a trustee of Mary’s will. Mary bequeathed £50 to the building fund of St James Church, Clacton-on-Sea and a similar amount to St Pauls Church maintenance fund.

Mary’s sisters Alice and Sarah Clayden inherited the house. Alice had previously lived in Littleham Cross in Devon. Alice died on 30th August 1951 aged 68. She had returned to Devon in her later years. No mention of Sarah.

At sometime the House was used as a dormitory to a local girls school also a convalescent home to an Army Group, unknown at present.

On Alice’s death Mrs Emily May Clayden Cox inherited the house. She lived until 16th June 1970. We have no record of her Will , but her trustees sold Astoria to Mr & Mrs Damiani cafa owners from Stratford East London for £8,200.00

The Damiani’s obtained planning permission in June 1971 to convert Astoria to The Sandrock Hotel, creating 6 bedrooms with en-suite toilets. They built a small extension to the rear. The Daniani’s did the major building works to Astoria, creating the current en-suite rooms. They installed the fire alarm system which was replaced 06, bringing the system up to the 21st century. They used a local architect, Roy Gould of Station Road to do the design work. Fortunately Mr & Mrs Damiani did not accept there first drawing which we have. But the second set make for a better layout. The Hotel lay out is very good for room privacy, each rooms en-suites forming a sound barrier between the main bedrooms. At that time there was 6 bedrooms and three bathrooms.

The Damiani’s sold up in 1985 for £81.000 to Mr & Mrs Norman who created room 7 and I assume fitted the showers. They retired in 1990 when Chris and Henry Jarvis bought The Sandrock Hotel for £110.00.00. They created room 8 and 9 by building two extensions over the 15 years they ran the Hotel. They have now also retired. The Normans and Jarvis’s still live local.

Jill and Paul brought The Sandrock Hotel in June 2005 and successfully run it until 2014. A major change was the name from The Sandrock Hotel which due to  AA regulations to whom they were affiliated, could longer call themselves a hotel. So during 2006, The Sandrock became a Guest House who offers some hotel standards.

The Sandrock was then taken over on 30th June 2014 by Christine & Roberto ; the intentions are to build up on the existing business and progressively update the accomodation for the benefit of our guests, bringing an improved comfort, without taking away the character of the house. To date – April 2015 – the heating system has been updated, so have the kitchen and most of the bathrooms ; more improvements are planned but of course work is put on hold for the summer and will start again after the high season.

When we first viewed The Sandrock in November 2013, it was love at first sight, and we hope you will feel at home in our house.